You are here: Home / Teasers / Teaser from Alpha’s Submission

It’s only four more days till Alpha’s Submission releases, the sequel to Alpha’s Sacrifice. If you’ve read that book, you’ll remember I left you guys hanging at a rather…exciting moment, haha. The good news is that we’ll pick up right there, so you’re in for a treat with the opening scene in Alpha’s Submission.

If you haven’t read Alpha’s Sacrifice yet, now is a great time so you can continue straight on with Alpha’s Submission! 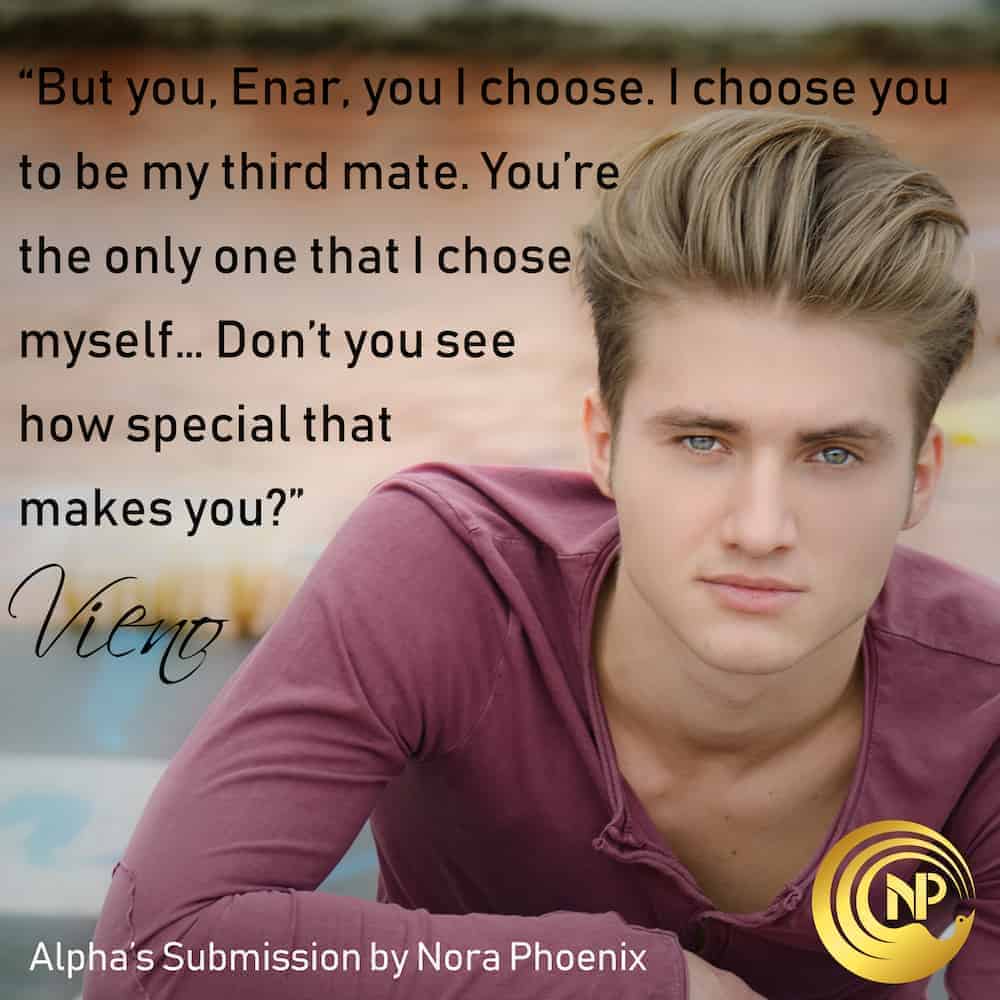 To whet your appetite a little more for this book, here’s a little excerpt. Please note this is copyrighted and not meant to share anywhere else:

“Thank you,” he said meekly. The smell of the barbecue ribs with mashed potatoes hit him, and his stomach rumbled.

Enar obeyed, keeping in a moan as the rich barbecue sauce hit him. Damn, that was good. “You’re gonna watch me eat?” he asked with his mouth full. “At least talk to me. How’s work?”

Lidon raised his eyebrows but obliged by sharing an investigation he was involved in right now. Enar knew he could talk to no one else about this. Palani was too risky considering his job, and Vieno…no one wanted to burden Vieno with anything heavy. It was how they rolled. So Lidon talked while Enar ate and listened, asking the occasional question.

He pushed his plate back with a satisfied sigh when he’d cleared it, licking the last bits of sauce of his fingers. “Thank you,” he told Lidon.

The silence hung between them, thickening.

Was that relief he saw on Lidon’s face? If so, it mirrored his own feelings because he was glad he’d said it, awkward and uncomfortable as it was.

“Me neither,” Lidon said. “I’ve never been good at the whole ‘let’s talk about our feelings’ thing and with you, it’s even harder…”

“You two are adorable and frustrating as fuck at the same time,” Palani spoke, startling Enar and Lidon both.

He walked into the kitchen dressed in the bright red boxers he always slept in, his eyes remarkably sharp considering he must have been asleep already. He walked over to Lidon first and gave him a kiss. The alpha’s hand drifted to Palani’s butt, and the beta let out a little moan when those big hands squeezed it. Then Lidon slapped it, sending Palani over to Enar.

Palani kissed him, a soft, sweet kiss that made the tight muscles in Enar’s face relax a little. “You have a headache,” Palani said and Enar nodded.

Palani pulled Enar’s head against his chest, cradling him and holding him while his fingers found sore points in his neck. “Long surgery?” he asked.

“Hmm,” Palani said, his fingers still kneading Enar’s neck. Enar moaned when the beta hit a sore spot, causing his arms to tingle and his skin to raise up in goose bumps.

“Why don’t you two take a bath?” Palani said. “It will help you relax your muscles.”

“Together?” Enar asked, then wanted to clamp his mouth at the surprise that was so clearly audible in his voice.

“Yes,” Palani said, his tone patient. “Together. Let Lidon rub out the tension in your neck and back while you two talk. Use one of the guest rooms so you don’t wake Vieno up. He’s cleaned most of them by now.”

He stepped back, letting go of Enar.

“Would you like that?” Lidon asked, his voice uncharacteristically insecure.

Palani rolled his eyes. “God, you two crack me up. Of course he wants to take a bath with you, Doc. He wants you to lean on him, so lean. Stop dancing around each other and give in to what you both want and need already. I’m going back to bed. Take care of each other.”