You are here: Home / Writing and Publishing MM Romances / When’s the Last Time You Tried Something New?

I’ve been traveling a lot the last few months. Too much, maybe, but I attended two events that were absolutely worth it. In both cases, I came back with pages full of notes, inspired to try new things. And I have. I’ve experimented with new ads, new marketing ideas, some approaches to writing I hadn’t considered before, and much more. And I freaking loved it. Some of it worked, some of it needs fine tuning, and a few things didn’t work for me as hoped. But at least I tried.

Granted, I’m someone who loves to try new stuff, but when’s the last time you tried something new? When did you experiment with something you’d never attempted before, just to see if it would work?

All too easily, we dismiss ideas. “That would never work in gay romance,” is the dismissal I hear most often. This is then directed at techniques or approaches that other genres use, like mainstream romance or even non-romance genres. And many MM authors aren’t even willing to try because they’re convinced it would never work. Or people try something and at the first setback, they give up and conclude it doesn’t work for them or for this genre.

Is that really true? Is it really true that all those techniques that have made other authors big and famous would not work in MM romance? ALL of them?

Sure, there will be things that may not work as well in a genre this small. take targeting Facebook ads, for example. That’s definitely more challenging when even the biggest authors aren’t big enough for Facebook to identify as an interest. Doesn’t mean Facebook ads in general don’t work.

And I know that there are valid reason why you can’t try something. Money, for example. I’m well aware that it’s a hell of a lot easier for me to talk about doing stuff than for many others, since I can afford a missed experiment here and there. But there are plenty of things you can play around with that cost nothing.

Most of the times, the real reason is fear. Fear of trying something new and failing. Fear that this, too, won’t work and you’re left with even less hope than before. Fear that maybe other authors will laugh at you, or think you’re a fool, or whatever. But if you let fear stop you, you’ll never get far…

We have a saying in Dutch, that literally translated goes like this: standing still means going backward. As soon as you stop trying new things, as soon as you’re content with the status quo and doing what you’ve always done, you’ve lost the race (and yes, I know it’s not technically a race, but just go with this analogy). If you keep doing what you’ve always done, don’t expect new results. If you want more, you’re gonna have to try something else, something new, something different.

Give co-writing a chance.

Play around with price points.

See if promotions will work.

Just…try. Experiment. Change. Do something different. Play around. Get creative. Evolve. Grow. Learn. 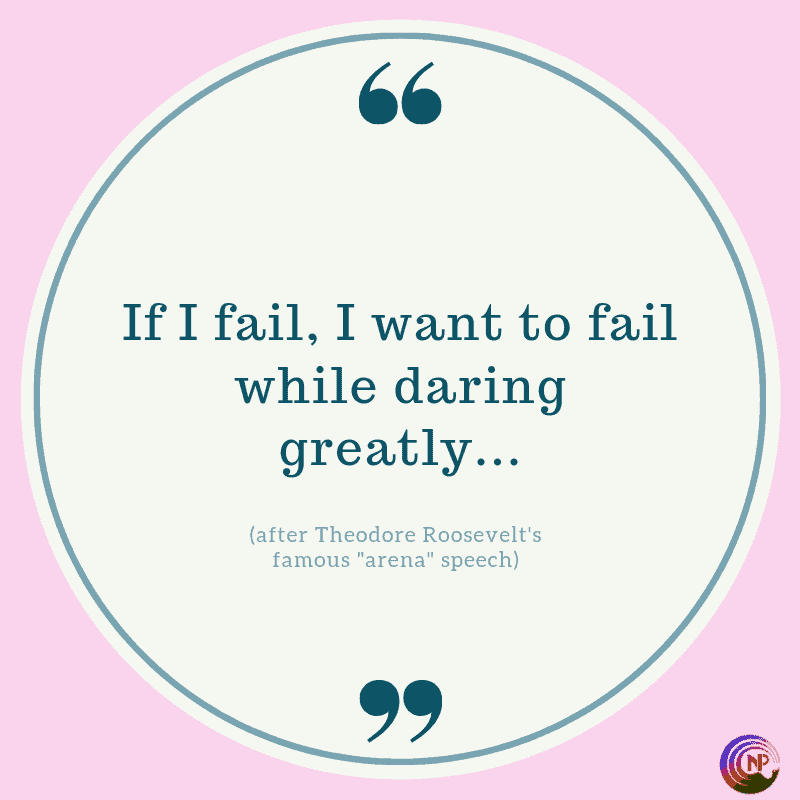 And if you fail, at least you can look at yourself in the mirror and say you tried. Or, as Theodore Roosevelt famously said: fail while daring greatly.

“It is not the critic who counts; not the man who points out how the strong man stumbles, or where the doer of deeds could have done them better. The credit belongs to the man who is actually in the arena, whose face is marred by dust and sweat and blood; who strives valiantly; who errs, who comes short again and again, because there is no effort without error and shortcoming; but who does actually strive to do the deeds; who knows great enthusiasms, the great devotions; who spends himself in a worthy cause; who at the best knows in the end the triumph of high achievement, and who at the worst, if he fails, at least fails while daring greatly, so that his place shall never be with those cold and timid souls who neither know victory nor defeat.”

That’s my motto: if I fail, I want to fail while daring greatly.

(though I’d rather succeed, haha…)