You are here: Home / Latest news / Three More Days till Kissing the Teacher

Kissing the Teacher releases in only three more days! Are you guys ready for this delicious, sweet daddy kink romance?

Hagen is a college professor and a former Dom who has decided he doesn’t want another boy. They’ll only leave again because he’s too safe, too boring. Too old. But when his former club organizes an event, he wants to go, and so he hires himself a boy. That boy turns out to be his sexy student Baxter, and Hagen finds himself enthralled. But when Baxter needs him, Hagen discovers he wants to be so much more than his Dom. He wants to be Baxter’s Daddy…but will Baxter let him?

I’m super excited about this book. It was a lot of fun to write, and Hagen and Baxter were so perfect together. It’s a little less angsty than most of my books, a little sweeter, though also plenty steamy, haha. I love me some daddy kink! 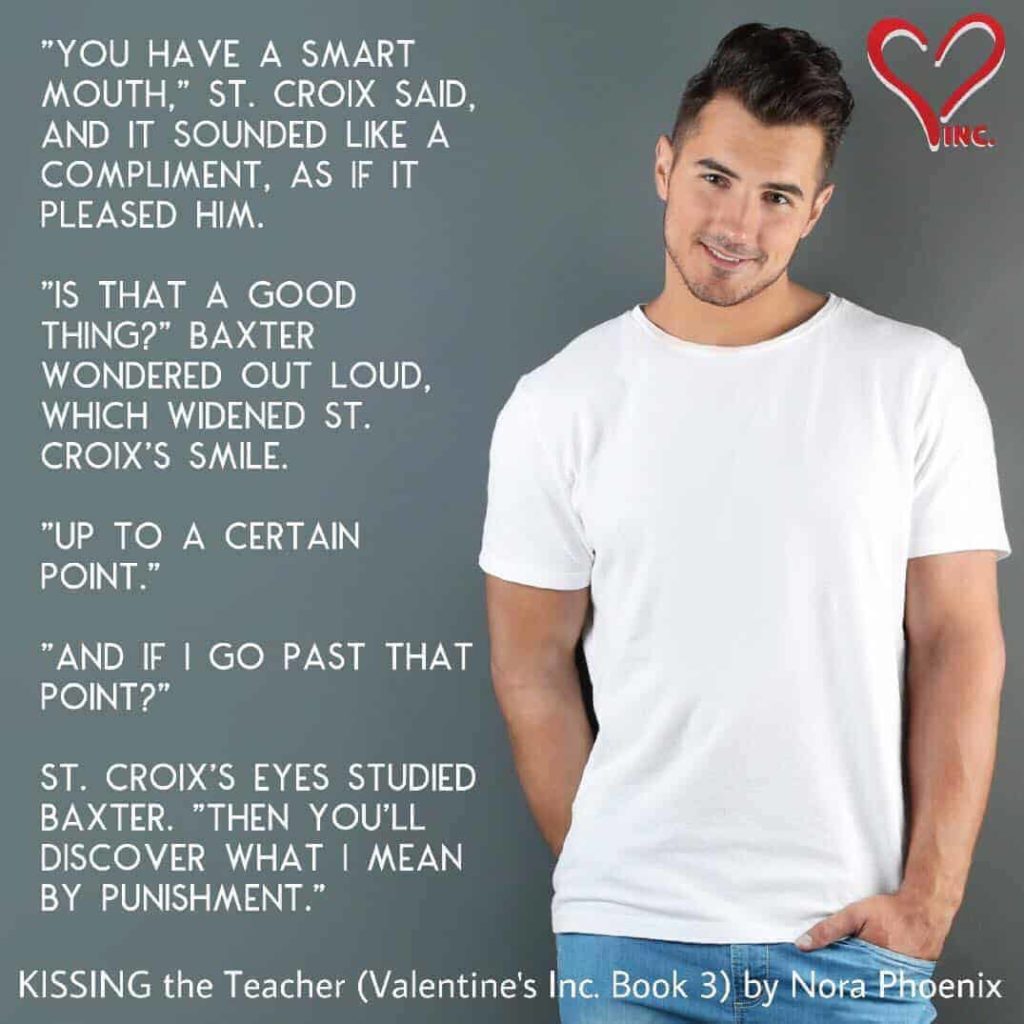 Here’s another little snippet, just to get you all excited, too…(unedited, so please forgive me for any mistakes)

Teaser from Kissing the Teacher

Baxter only needed a small nudge to reverse positions, and if he had thought being on top of Hagen was heaven, it was nothing compared to laying on his back on the couch with that strong body covering his. He felt very much like a boy now, being taken apart by a man. Everything about Hagen was hard and masculine, from the slight stubble on his cheeks to his hands, his body, his dick that was grinding into Baxter with slow circles.

Baxter’s own cock was equally hard, and how he wanted more friction. He raised his hips, tried to find a part of Hagen’s body to grind against. A sharp nip on his bottom lip made him gasp.

“You take what I give you,” Hagen growled, and oh God, had he ever sound sexier?

Baxter was learning things about himself he never knew. Like how much he liked it when Hagen did this, when his voice got that low, dominant edge to it. “Yes, Sir,” he said, the desire to call him anything else but Hagen too deep to ignore.

“Good boy,” Hagen said, and then he moved his hand between their bodies, cupping Baxter’s groin with a firm, decisive grip. “This is mine now, Baxter. You don’t get to decide anymore. I do.”

“Yes, Sir,” Baxter managed, his body fighting the urge to buck against Hagen’s hand, to grind against him.

Hagen’s mouth moved from Baxter’s to his ear, where the man’s tongue traced his shell first, which caused shivers to dance down Baxter’s spine, before tickling his earlobe. It was a feeling far more pleasant than Baxter had ever expected, but when Hagen started the assault on his ear for real, switching licks with little sucks and nibbles, he went nearly mad. Who the fuck had thought his ear was such an erogenous zone?

This time, he couldn’t keep himself from responding, and his hips came off the couch to rub against Hagen’s hand, which still held his junk in a possessive hold. That hold increased in pressure immediately, and Baxter would’ve thought that would cool him down, but it didn’t.

“What did I tell you about this?” Hagen said in that same deep voice.

His warm breath danced over Baxter’s wet ear, and he would’ve done anything for Hagen to continue. Hell, if Hagen kept that up, that delicious exploration of his ear, combined with the pressure on his dick, it won’t take long for Baxter to come.

“You said to take what you give me,” he groaned, fighting so hard to not do it again.

The pressure on his junk increased even more, and it took two gasping-for-breath seconds to figure out why. “Sir,” Baxter almost shouted. “Sir, please.”

Hagen’s hand let go, but just a little, and the smile he sent Baxter was downright dirty. “Oh boy, aren’t you pretty when you beg?” he said, trailing Baxter’s mouth with his index finger. “Your eyes are all dark with desperation, and I love the way your lips look after I’ve kissed you. They’re all red and swollen, so fucking wanton.”