You are here: Home / Teasers / Teaser from Omega’s Protector

Just a few more days before the mpreg freebie goes live! In case you missed the previous post on this, check it out here. As I said there, my free novella is called Omega’s Protector, and it’s a stand alone MMM romance set in the Irresistible Omegas world.

When Officer Sean Lilienfield sees an omega being sexually assaulted, he steps in to save him. But when his own coworkers are out to arrest him for it, he’s warned by police lawyer Felix to flee. Sean takes the omega, Gia, to the ranch of his former partner Lidon, where beta Felix joins them as well. Gia’s heat is about to start and in a shocking move, he asks both men to help him. Can this be more than a sexual encounter, fueled by a heat? 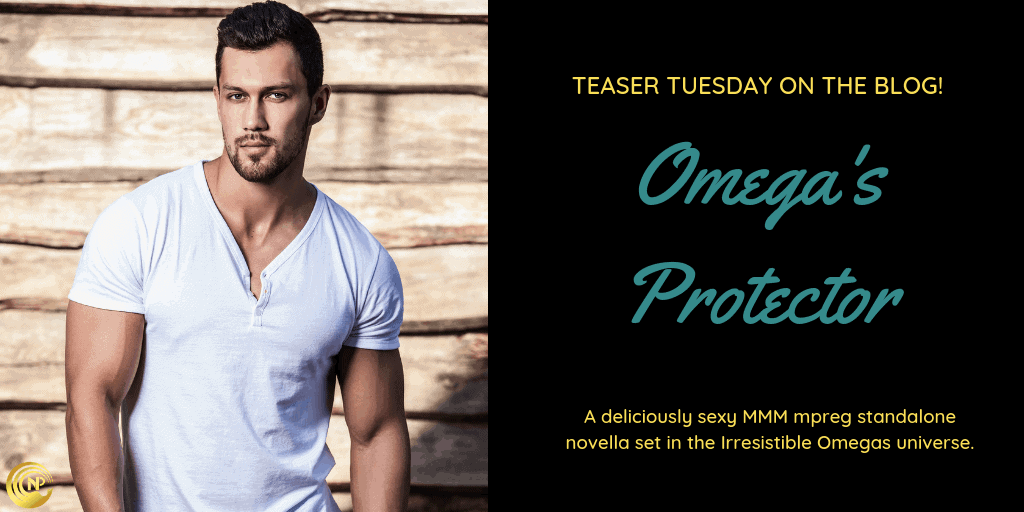 Here’s a little teaser from Omega’s protector, coming to Instafreebie/Prolific Works on May 24th! This is still unedited, so it may have some typos and stuff, but it’s fully copyrighted.

He could smell him more the closer he got to him, but it still wasn’t overwhelming. Exceedingly pleasant for sure, and his cock hardened in his pants, but not unbearably so.

The omega turned around as Felix entered the kitchen. “Hi,” he said, a careful look in his eyes.

“Gia. Thank you for warning Sean about the arrest,” the omega said, and god, he had the most perfect voice, melodious like the high notes of a piano. He sounded like a Chopin étude, the ones Felix’s mother had loved to listen to while knitting.

“You’re welcome,” Felix forced himself to say, hoping he’d managed to come off sounding normal. “What are you cooking?”

Gia laughed, and if Felix had thought his voice was melodious, that topped it. “A stir fry, which is a fancy term for me throwing random stuff together. Cooking is my way of relaxing, of finding my balance. I just started working with what I could find in the cupboards and fridge here.”

Gia shot him an amused look. “I sure hope so, considering I’m a chef.”

“Technically, no. I’m an omega, so obviously, I can’t be a chef. But I’ve got the skills and the experience to be one.”

Felix looked at Sean, who stared at Gia with a look of admiration that had to mirror the one on Felix’s own face. He sighed inwardly. Just his luck, finally meeting an omega who made him feel more, only to find out he already belonged to an alpha. Story of his life, always second choice, never quite good enough to be chosen first.

“Are you guys hungry?” Gia asked, and Felix wanted to marry him on the spot.

He and Sean each grabbed a chair at the dining table in the kitchen as Gia continued stirring something that smelled almost as delicious as he did. Felix forced his eyes away from the omega he could never have.

I hope you’re all excited to read this! If you’ve read the Irresistible Omegas series, you’ll love visiting the ranch and seeing some familiar faces pop up, but if you haven’t read that series yet, this book can be read as a stand alone. It’s the perfect way to try if you’d like that series!