You are here: Home / Teasers / Teaser from Firm Hand

I hope you’re all super excited about my upcoming book Firm Hand. If you missed the announcement about this sexy, emotional reversed daddy kink romance between a man and his best friend’s son, check out this post.

I don’t have a release date set yet, but it should be sometime this month! To whet your appetite, here’s a little teaser…

“I’m not baiting you,” he said, and much to his own chagrin, he could hear the pout in his tone.

Rhys folded his arms across his chest. “Do I need to point out that you were jerking off in front of me? Not sure what else to call that but baiting me.”

The fact that Rhys was so calm about it took Cornell’s thunder away. “You keep interrupting me in the mornings,” he said, pouting even more. God, what was he, a teenager again? “That’s why I asked for privacy yesterday, but you made such a big drama out of it.”

Rhys shook his head. “I made a drama? All you had to do was tell me you wanted to jack off and I would’ve walked away.”

“Like you would’ve given me permission,” Cornell said, and his cheeks flushed as he realized what he had blurted out.

To his credit, Rhys looked like he was trying not to grin, though he failed miserably. “I didn’t know you wanted or needed my permission.”

“I don’t,” Cornell said. “I don’t know why I said that. Besides, I had already come yesterday anyway, but I didn’t want you to see that.”

“And you’re telling me this, why?”

God, he was infuriating. He was so calm and collected when Cornell felt like he was losing it by the second, stammering and making a complete fool out of himself.

“I wanted to let you know I need some privacy in the mornings,” he said, unable to come up with a more plausible reason. Well, there was one, but no way was he sharing that with Rhys. He’d shown enough of his hand already. Then again, he’d always sucked at playing poker.

“I suggest you wake up earlier, then,” Rhys said. “I’m here every morning at eight sharp. You wanna jack off before breakfast, set a damn alarm.”

He had a point there, Cornell had to admit. Again. He finally let go of his cock, which had lost interest anyway, and tucked himself back in. “Okay,” he said, surrendering to the inevitable.

“What do you want me to say?” Cornell snapped. “You’re right, okay. I was baiting you.”

“I know. I recognize a bratty sub when I see one.”

“You don’t like bratty subs?”  The question was out of Cornell’s mouth before he even realized it, and his cheeks heated up all over again. How infuriating that in his forties, he still hadn’t gotten over that insane habit of blushing. “Forget I asked that,” he said quickly.

Rhys merely grinned at him. “Go eat your breakfast before your coffee gets cold. And wash your damn hands first.”

“Yes, but with some added flax seed, which I know you’re not a fan of. But if you eat all of it, I have a reward for you later.”

Cornell felt himself respond to it, the promise of that reward for good behavior. How he longed to please Rhys, even if he wasn’t his Dom. 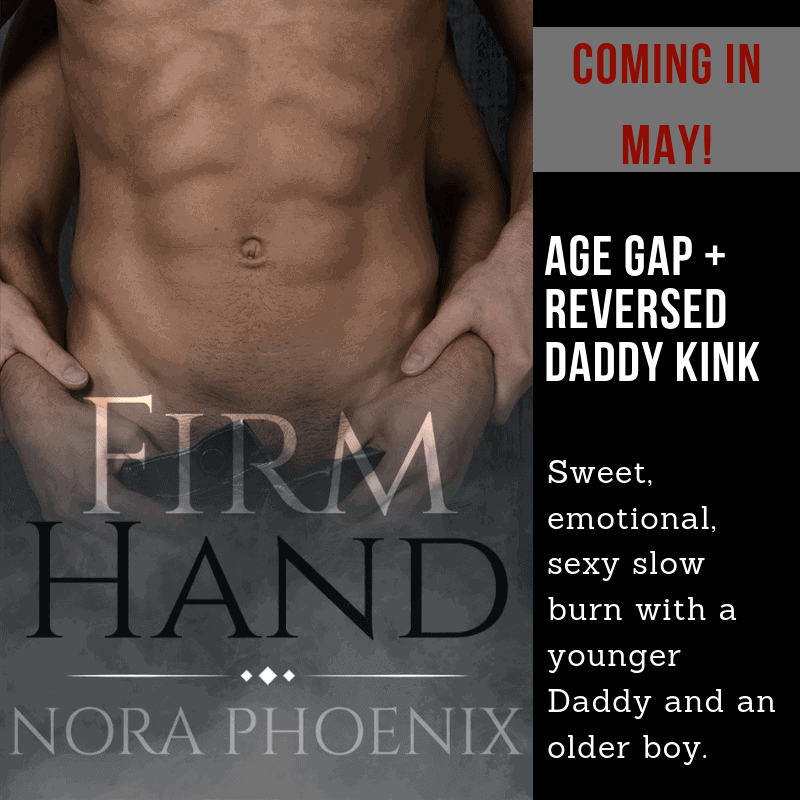