You are here: Home / Teasers / Teaser from Campy

Campy will be releasing in just two days, so to whet your appetite, I figured I’d share a little teaser. Now, if you’ve read the first three books in the Ballsy Boys series, you’ll know that Campy is a bit of a mystery. He’s hiding something…but what? When he gets himself a new roommate, a hot cowboy-turned-actor from Texas named Jackson, Campy’s secrets start to unravel…

“I have a role in a new series that’ll be broadcast in a few weeks, called Hill Country. We shot the pilot a few weeks ago in Toronto, and it’s been picked up by a major network, so now we’re starting on shooting the rest.”

Anna’s eyes widen. “That’s amazing! How very cool for you. Is it a big part?”

I nod. “Yeah, I’m one of the four main characters. It’s about a family in Texas who has to cope after the dad dies unexpectedly, and I play the oldest son.”

Anna and Tina share a look. “You’re perfect for that role, what with your accent,” Anna says with a big smile.

I grin. “That’s what the casting agent said as well. They preferred people with a natural Texan accent rather than teachin’ someone, so that turned out well for me. I reckon I have a bit of a drawl.” I lay it on thick and the girls both giggle.

“I could listen to you read the phone book,” Tina says. “Though the rest of you isn’t too shabby either. Maybe you could take me out sometime in LA? Check out the nightlife together?”

Here we go. This is the moment when I have to decide how much of a fresh start I really want to make. All my life, I’ve responded to scenarios like this the same way, but I’m so tired of it, so tired of pretending to be something and someone I’m not.

I take a deep breath and allow myself to feel the freedom. “As nice as that sounds, I’m gonna have to kindly decline, as I’m gay.”

The rush that rolls through me after those words are said makes me light-headed. I did it. For the first time in my life, I’ve casually come out in a conversation. It may be stupid and insignificant to others, but as Anna and Tina both look surprised, I’m sitting on a rambling, bouncing bus, feeling doggone proud of myself.

My parents never allowed me to be myself. It wasn’t that they flat-out forbade me, more like they gave off a consistent air of disapproval. But, they’re not here. Heck, they don’t even know about my acting job, about me moving here. As far as they know, I’m still at the Southern Baptist college they pressured me into attending, God bless ‘em.

Sure, I feel guilty about deceiving them, though I’m a tad more worried about my brother Brax’s reaction when he finds out. We’ve always been close, and I hate lying to him. I wanted to tell him about quitting college and moving so badly, but I didn’t want to put him in a position where he’d have to lie to Mama and Dad. He could never lie for crap anyway.

“Wow, I did not see that coming,” Tina says, flipping her hair back. “My gaydar isn’t usually that far off. Well, too bad. I’m sure we could’ve had fun together.”

“I have no doubt,” I say, even as I wink at Anna, who’s clearly suppressing a laugh.

My name is Jackson Bedford Criswell and why, yes, I am gay. 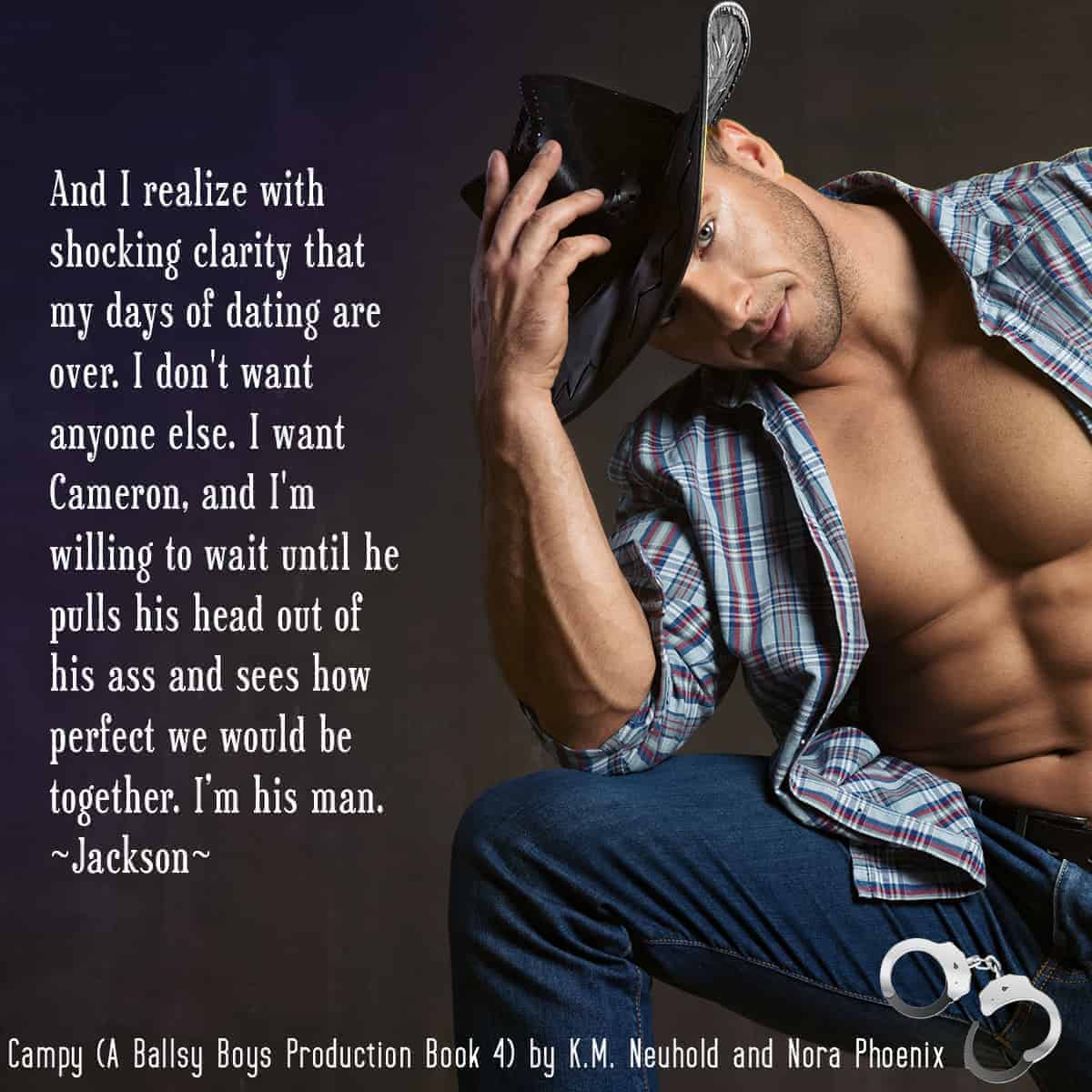 I hope you’re excited about Campy! Kyleen and I can’t wait for you guys to read this book… Only TWO more days!