You are here: Home / All Posts / Interview with Saxton Truss O’Malley

Today, I’m sitting down with Saxton Truss from Healing Hand. It took Saxton a long time to open up about his story so I could write this book, and I had to promise him I wouldn’t bring up anything in this interview that he couldn’t talk about. That was an easy promise.

Saxton, thank you so much for talking to me.

So first of all, how have you been?

Good. That’s the standard answer, I know, but we’ve been really good. Gale is doing well in his job, and I’m almost done with my PhD research. We love our new house, and we even got two cats. Molly and Maddie. We’re genuinely good. Happy.

I’m so glad to hear that. You two deserved it.

Thank you. It’s been a journey for the both of us for certain, though not so much in our relationship itself. That was surprisingly strong and stable right from the start. Gale says it’s because our hearts recognized we belonged together, but that’s just him and his big, romantic heart talking. He’s so sweet in those things, always making the effort. Gale is like his mom, so full of love and light and hope. It’s almost annoying at times [laughs]. 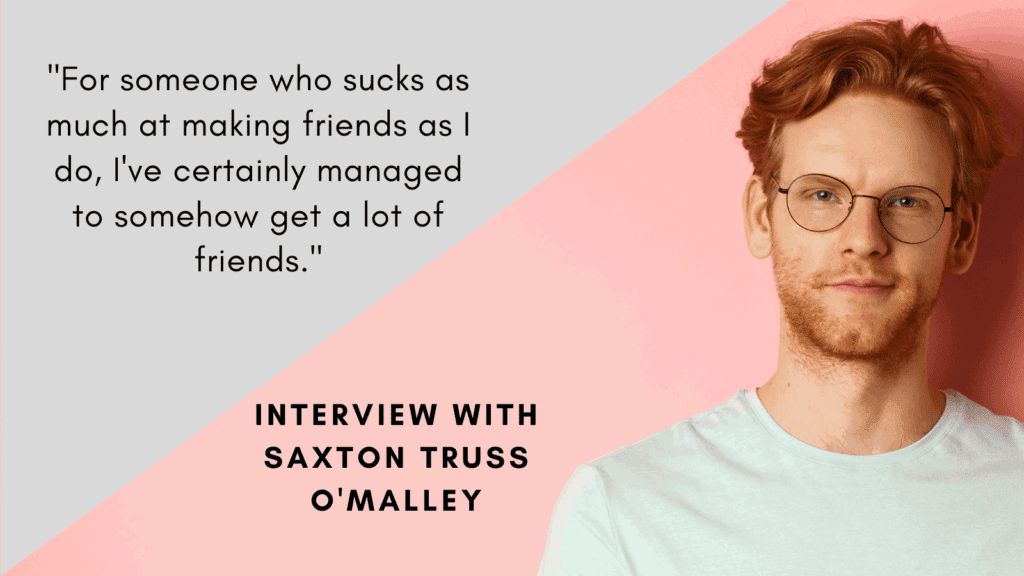 His mom is amazing.

Both his parents are, but yeah. Momma Lori become the mother I never had. We hang out a lot, even without Gale. Just her and me, like I’d always imagined it would be with a mom who cared.

How are things with your father?

Surprisingly good. We saw each other again for the first time in years on our wedding day, and a few weeks after that, he came over to the house and we talked. Superficial stuff, but it was a start. Ever since, we’ve been seeing each other once every two months or so, and it’s slowly grown deeper and more personal. It’s still super hard for me to talk about, but he apologized for how he had handled things, and that meant the world to me. I’m hopeful that we’ll grow even closer over time.

That chapter is closed. I talked about it with my father, and neither of us have any desire to speak to her ever again. But I have Momma Lori and Gale’s father, and of course, all our friends. Lexi, AJ, and George hang out at our place a lot, and I love them. They’re amazing. For someone who sucks as much at making friends as I do, I’ve certainly managed to somehow get a lot of friends.

You and Raf really seemed to connect as well…

[smiles] We did. When we met in the club that first time, we already hit it off, and we’ve had a lot of playdates since. With Thierry as well. The three of us can play together for hours, which makes our Daddies happy. They just sit and chat while we play, and we’ve even gotten Jathan to play with us a few times. I thought he was an asshole at first, but he’s not. He’s super sweet and patient with Thierry, and he’s actually very careful with me and Raf as well. It’s just grown ups he takes issue with, and most of his brattiness is reserved for Master Ford. Or Daddy Ford, I should say. But he can take it. He loves them both so much… We all enjoy hanging out together, even with Rhys and Cornell though they’re not Daddy and little.

Why do you think you’re all such a good match?

[his smile fades] The polite answer would be that we’re all littles, so of course we get along, but that’s not the whole truth. The three of us share traumas in our past. Different ones, but we came out hurting and vulnerable, and that means we get each other. We’re kind and patient with each other. Soft. Because we all know that not all of our traumas is visible on the outside. Raf said it the first time we met: we’re different, and that means we get each other. Thierry still doesn’t like to be touched, for example, and Raf and I both understand that and respect it. We’re physical with each other, but never with Thierry. We hang out with Noah’s family as well, and I love that. They’re so… They’re amazing. Indy and Josh and all of them. There’s so much love in that house that you can just feel it when you walk through the door.

You and I first started talking three years ago, two years before I actually wrote your book. But then you stopped talking. Can you tell me what happened?

[nods slowly] Yeah, it does. Being asexual or demisexual is valid and I wish more people understood what it meant. And my story is just one and it’s not typical, but it is valid. I wanted to show people that you can have an amazing, wonderful relationship without sex. Or penetrative sex, I should say. People so often think that because sex is important to them, it is to everyone, but it’s not. Gale genuinely doesn’t care. Or maybe I should say, doesn’t mind. He loves it when we are intimate, but he’s never missed doing more than kissing and frotting and the occasional hand job. And I know he’s telling me the truth. It was really hard to share this all with you, but I’m glad I did. I’ve heard from a lot of people who read my story that it helped them understand what and who they were. That makes it all worth it.