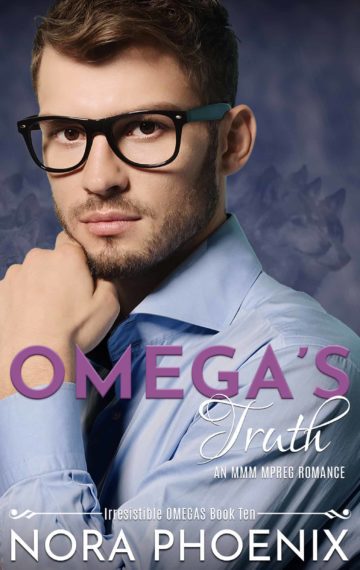 The truth will set Sando free…

Sando feels caught between a rock and a hard stone. He wants to be with Maz and Lucan more than anything, but what about his father? How can he dishonor the man he owes his life?

But when the truth comes out about his identity, everything he believed turns out to be a lie, and he turns to the two men who have let him down. Is he too late or do they still want him?

Meanwhile, the pack has split in two, but both packs face the same threat: General Armitage. What does he want with them? Can they exist in peace or will they always have to fear for their lives? The answer lies in an old prophecy…

This friends to lover MMM romance is the tenth and final book in the Irresistible Omegas series, a bestselling mpreg romance series which needs to be read in order to enjoy the plot lines fully. Both this romance and the series end with a happy ever after, though some side characters may get their story in a spin off series with the second pack.

Omega’s Truth is also available in audio, narrated by John Solo. You can grab it here. Listen to a sample below!